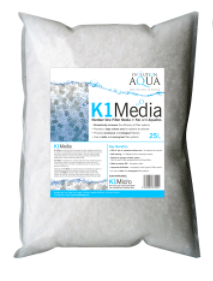 K1 Media from Evolution Aqua creates a high level of biological filtration due to the unique shape and movement of each piece of K1 Media.

K1 Media has been created in a wheel shape providing a large surface area allowing for the growth for bacteria to colonies which breakdown the nitrite and ammonia in the water.  Due to Evolution Aqua’s wheel shape design of the K1 Media and the fact this allow water to flow freely thought the K1 media, when the K1 Media is used in conjunction with an air pump the media can move around in the filtration chamber more freely, allowing for maximum exposure to the water, which in turn reduces maintenance.

K1 Media is perfectly suited  for use in the Evolution Aqua Eazypod and Nexus filters.