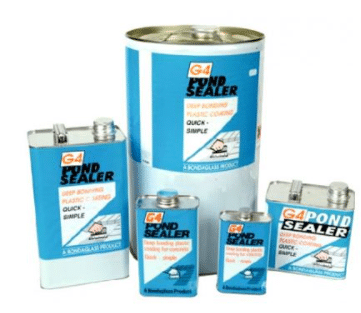 As a general rule the pond should be constructed to be structurally sound since the G4 pond sealer only provides the waterproof seal, on no account use a P.V.A based sealer to seal or prime any surfaces, these materials can contain ammonia and also stop the G4 pond sealer from adhering to the render.

Ponds will normally be constructed with either brick, lightweight block or concrete block and then rendered, it is not necessary to add waterproofing agents to the render mix as this will increase the density of the render and can inhibit G4 pond sealer penetration, if a waterproofing agent has been used, simply rub down the surface with an abrasive to obtain a key.

If a fibre is used to give strength to the render it is necessary to burn off or sand down any fibres that are on the surface, as any fibres that protrude will cause leakage, G4 pond sealer will not bond to the fibres.

The cement render should be trowelled to an even surface but not to a smooth dense plaster like finish since this prevents the penetration of G4 pond sealer, new render should be kept damp for the first three days and then allowed to harden for 21-28 days depending on conditions.

G4  Sealer is an excellent sealer for brickwork, but below the waterline the brick should also be rendered. The reason is that while the G4 Pond Sealer is able to seal hairline cracks G4 Pond Sealer is not capable of bridging larger joints, cracks or holes.

Apply the first coat of G4  sealer by brush, a roller can be used but it is necessary to avoid puddling of the G4 sealer on the base, it is best to use a brush, allow the first coat of G4 sealer to become finger tacky ( like cello tape ) or dry enough to walk upon carefully, approximately 45-60 minutes depending on humidity, then apply 2nd coat of G4 pond sealer, when second coat of G4 pond sealer is finger tacky apply third coat of G4 sealer, no longer than 4 hours should pass between coats, if a colour is used, then use 2 coats of standard and 2 coats of colour, G4 sealer is mechanically hard after 24 hours but must be given 72 hours to chemically cure, after which the pond can be washed down with plenty of water, drained, and can then be filled.

We strongly recommend that you mix Black Knight Wizard Fibre or some similar fibre into the render mix. This will help prevent the frost cracking the render in winter and give additional strength to the structure.

The system is slightly different. When using G4 Sealer Colour the first two coats must be G4 Sealer Clear. This is because G4 Pond Sealer Clear provides the maximum non-porous seal and adhesion.

Follow the application instructions as detailed for G4  Sealer Clear but the last two coats will be G4 Pond Sealer Colour. G4 Pond Sealer is mechanically hard after 24 hours and workable on some 6 hours after final application. However, 72 hours must elapse for full chemical cure, before washing down the G4 Pond Sealer with copious amounts of clean water. This water should be drained off. The koi Pond can then be filled. Consumption of G4 Pond Sealer will vary slightly according to the porosity of the substrate.

If rain is expected make provision for covering the coated area, since water can damage the G4 pond sealer during the curing process. As soon as it is superficially dry water should not affect G4 pond sealer